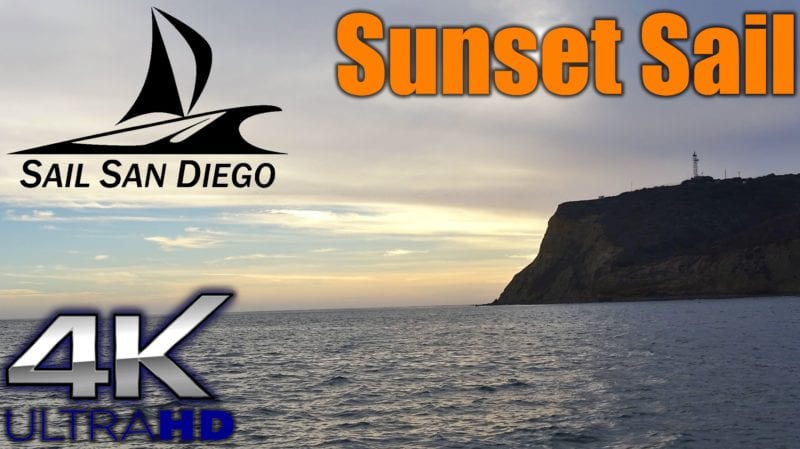 For over 30 years, Sail San Diego has been the #1 sailboat charter in San Diego, and we’re still going strong as #1… just ask TripAdvisor!

We’ve recently been expanding our YouTube channel here at Sail San Diego, and that with 4K Ultra High Definition video:

(Use the gear icon, and select 2160p 4K to watch in UHD. Make sure to subscribe & turn-on notifications as well! Having trouble? Try watching directly on YouTube by CLICKING HERE.)

Most recently, we boarded a 3-hour sunset sail with “Happy” Captain Greg Tupaj and some couples that were Sail San Diego guests. As we departed the Shelter Island Marina (our fleet’s home), the guests took a consensus among themselves as to where they wanted to sail. The Pacific Ocean (as opposed to the San Diego Bay) won the vote! Captain Greg obliged.

Shelter Island is one of the closest marinas in San Diego Bay to the mouth of the Pacific Ocean. This means that our Sunset Sail guests get to spend the majority of their 3-hour Sunset Sails in the open Pacific Ocean (if that’s what they choose). (Other, less-ideal, departure points in the Bay, such as Harbor Island, require about an hour of sailing to reach the Ocean.)

The weather was mild, as San Diego is known for. As we entered the main Harbor canal, we came across a couple families of sea lions and seabirds lounging on a fishing bait dock. Later, we caught up with some seagulls and a flying heron.

Although this video was shot just a couple weeks before San Diego’s Gray Whale migration season, Happy Captain Greg and our other captains have already been seeing some whales, as of the posting of this blog entry! (Don’t worry… more 4K videos to come!) 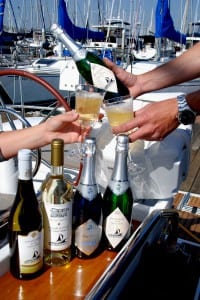 Our guests enjoyed some beer & white wine (provided complimentary on all of our sailing tours) while Captain Greg sailed us into open water. We saw the Downtown San Diego skyline, Coronado Bridge & Hotel Del Coronado in the distance, while it was still light out.

San Diego is a major military hub. We were reminded of the might of America’s Armed Forces as we got to see a few military helicopters, including a gunship, in flight. We saw a fighter jet take off from “North Island”, and several military sea-crafts passed by as well.

We then chilled out in the open water of the Pacific Ocean to enjoy one of San Diego’s beautiful sunsets. Captain Greg allowed our guests their choice of music (our guests can plug their own electronic devices into our sailing yachts’ sound systems with an aux cord/Bluetooth/NFC). The scene was incredibly peaceful & serene.

We began heading back as it got dark. Downtown San Diego looks absolutely beautiful at night, from the water. You’ve got to see it for yourself!

Book your Next Trip With Sail San Diego

Crafted with in San Diego by Creatively Disruptive © 2020