Here you will find a list of the 11 dolphin species that can be seen in our California waters.

Starting with the most common dolphins, you will learn about the different species to lookout for, and hopefully after reading this blog you will be able to name them when you see them.

There are two types of dolphins that belong to the same biological classification as (genus Delphinus “before family, after species”) known as the “common dolphins”

The Short-Beaked Common Dolphin’s are known for their dark backs and their white belly, while on each side they have an hourglass pattern colored light grey, yellow or gold in front and dirty grey in the back. Adult Short-beaked dolphins vary in length, from five to eight feet and range from 220lbs-299lbs. It has a long, thin rostrum (beak like projection) with 50–60 small, sharp, interlocking teeth on each side of each jaw. Juvenile dolphins have a subtle muted appearance that becomes more distinct as they mature. This dolphin is commonly found in warm tropical waters.

The Long-Beaked Common Dolphin has similar characteristics as the short-beaked common dolphin. The color pattern on their body is unusual, their back is dark and their belly is white, while on each side they have an hourglass pattern colored light grey, yellow or gold in front and dirty grey in back. Adults range between 6.2ft and 8.2ft and can weigh 176lbs to 518lbs. It has a long, thin rostrum (beak like projection) with up to 60 small, sharp, interlocking teeth on each side of their jaw. They have more teeth than any other delphinids (widely distributed family of dolphins) This dolphin is found in warm tropical waters.

The Short Finned Pilot Whale is part of the dolphin family though its behavior is similar to that of the larger whales. The short finned pilot whale has a stalky body, a bulbous forehead, no prominent beak, long flippers that are sharply pointed at the tip, black or dark grey in color, and their dorsal fin is set forward on the body. The flukes (tail fins) are often seen raised out of the water before a deep dive, they may float motionless at the surface, they are frequently seen in very large groups, and prefer deep water. Adult males are about 18ft in length whereas adult females can reach about 12ft in length. Adults can weigh from 2200lbs to 6600lbs, when they’re born they’re about 4ft to 6ft in length and can weigh about 130lbs. Males live nearly 45 years, whereas females can live up to 60 years. 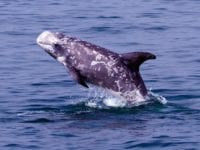 The Risso’s Dolphin is commonly known as the “monk dolphin”  This dolphin has a relatively large anterior body and dorsal fin, while the posterior tapers down to a relatively narrow tail, its bulbous head has a vertical crease in front.  These dolphins accumulate scars over the bulk of their body from social interaction. Older individuals appear mostly white. Most of them have to to seven pairs of teeth all their lower jaw. They reach an average 10ft to 13 ft and like most dolphins males are typically slightly larger than females, Weighing 660lbs to 1,100lbs making it the largest species called “dolphin”.

The Pacific White Sided Dolphin has three colors. The chin, throat and belly are a creamy white. Their beak, flippers, back, and dorsal fin are dark grey. Light grey patches are seen on the sides and a further light grey stripe runs from above the eye to below the dorsal fin where it thickens along the tail stock. A dark grey ring surrounds their eye. This is an average sized species of dolphin, Females weigh up to 330lbs and males 440lbs, with males reaching 8ft,  and females 7.5ft in length. They’re believed to live up to 40 years or more, with an average of 60 teeth. The pacific white sided dolphin is extremely active and mixes with  many other North Pacific cetacean species. These dolphins readily approach boats to play in the wakes and the bow rides.

The Northern Right Whale Dolphin has a streamline body with a sloping forehead, being a smaller and more slender species of the delphinids. This dolphin lacks any fin or ridge on the smoothly curving back. The beak is short and well defined with a straight mouth line and an irregular white patch on its chin. The flippers are small, curved, narrow and pointed, the body is mostly black while the underside is partly white or lighter in color. This dolphins tail flukes are triangular and, like its flippers pointed. Adults weigh between 130lbs to 2020lbs, and in length they range from 6ft to 9ft. They have 74 to 108 sharp teeth that are not visible externally. Typically they are found in cold waters.

Killer Whale, or orca is a toothed whale belonging to the oceanic dolphin family making it the largest member. They have a black back, white chest and sides, and a white patch above and behind the eye. Calves are born with a yellowish or orange tint which later fades to white. Killer Whales are heavy and robust with a large dorsal fin up to 5.9ft tall, behind their fin they have a gray patch across their back.  Adult males typically range from 20ft to 26ft long and weigh an average of 6 tons, females are smaller ranging from 16ft to 23ft and weight an average of 4 tons. The killer whales size and strength make it among the fastest marine mammals which are able to reach speeds of 35mph. 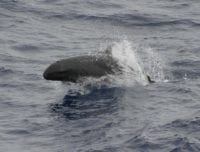 The False Killer Whale is the fourth-largest dolphin in the oceanic dolphin family. The false killer whale is black with a grey throat and neck. It has a slender body with an elongated, tapered head and 44 teeth. Its dorsal fin is sickle-shaped and its flippers are narrow, short, and pointed. The average size is around 16ft. Female can reach a maximum known size of 17ft in length and 2,600lbs in weight, while the largest males can reach 20ft and as much as 4,900lbs. The false killer whale has not been studied extensively in the wild; much of the data about it have been derived by examining stranded false killer whales.

The Pantropical Spotted Dolphin Is a species of dolphin found in all the worlds temperature and tropical oceans. The pantropical spotted dolphin varies significantly in size and coloration throughout its range. Spots on these dolphins are key in defining characteristics in adults, though immature individuals are generally uniformly colored and susceptible to confusion with the bottlenose dolphin. The dolphin has a long, thin beak. The upper and lower jaws are darkly colored, but separated by thin white “lips”. Its chin, throat, and belly are white to pale grey with a limited number of spots. The flanks are separated into three distinct bands of color, lightest in the bottom, grey in the middle and dark grey in the back. These are very active dolphins, known to make large splashy leaps from the sea. They often swim with tuna due to their similar diets. 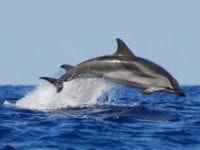 The Striped dolphin has a similar size and shape to several other dolphins that inhabit the waters, However its coloring is very different and makes it relatively easy to notice at sea. The underside is blue, white, or pink. One or two black bands circle the eyes, and then run across their back to the flipper. The bands widen to the width of the flipper which are the same size. Two further black stripes run from behind their eye, one is short and ends just above the flipper. At birth these dolphins weigh about 22lbs and are up to 3 feet long. By adulthood they grow to 8ft 330lbs for the females and 8.5ft 352lbs for males. The striped dolphin moves in large groups, usually thousands of individual dolphins are seen together. They are usually seen breaching and jumping far above the surface of the water.

The Rough-Toothed Dolphin is a species of dolphin that can be found in deep warm and tropical waters around the world. This is a relatively large species, with adults ranging from 7ft to 9ft in length, and weighing between 189lbs and 342lbs. Males are larger than females. The rough-toothed dolphins most visible characteristic is its conical head and slender nose. As the name for the species implies, the teeth are also distinctive, having roughened surface formed by numerous narrow irregular ridges. They have been reported to have between nineteen and twenty-eight teeth in each quarter of the jaw. This dolphin is commonly mistaken for the bottlenose dolphin, but its pronounced dorsal fin and flippers that are more set back. 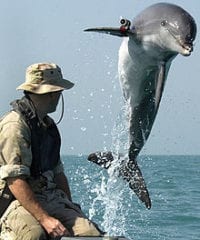 The Bottlenose Dolphin are the most familiar dolphins due to the wide exposure they receive in captivity in marine parks. They inhabit temperate and tropical oceans throughout the word, and are absent only from polar waters. The common bottlenose dolphin is grey in color and may be between 6.6ft and 13.1ft long, and weight ranging between 330lbs to 1,430lbs. Males are generally larger and heavier than females. These dolphins have a short and well defined snout that looks like an old-fashioned gin bottle, which is the source for their common name. Like all whales and dolphins, thought, the snout is not a functional nose; the nose instead evolved into the blowhole on the top of their heads. Their necks are more flexible than other dolphins due to five of their seven vertebrae not being fused together. This dolphin has a bigger brain than humans. Investigations of the bottlenose dolphin intelligence include tests of mimicry, the use of artificial language, object categorization, and self-recognition. Common bottle nose dolphins are popular in aquarium shows and television programs. They also use them in the U.S. Navy Marine Mammal Program to locate sea mines and for detection and marking of enemy divers. In some areas, they cooperate with local fishermen by driving fish toward the fishermen and eat the fish that escape the fisherman’s nets.

Thanks for taking the time to educate yourselves about the dolphins that can be seen in our California waters. Hopefully you can use this as a guide when you join us!

Book your Next Trip With Sail San Diego

Crafted with in San Diego by Creatively Disruptive © 2019
Call Now